1ST of all I’d like to welcome you all to Wales and the CRASH festival 2011 how has it been for you guys? “It’s our 1st time here today and we played at the Cambridge festival yesterday.

It’s been fantastic we’ve really enjoyed it. Our fans enjoy ‘Angel of mercy’ it’s their favourite; it’s a great powerful song and full of emotion.

When we’re playing on stage its unexplainable a total high. In one word FREE and a total connection with the crowds”.

“We all dream as a band to one day play at Glastonbury , Download and Monsters of rock, those are the 3 we would love.

We don’t play much at home as there isn’t many venues in Port Elizabeth really, our goals are only to play the big stages. We aim for that all the time if it means we don’t get to play every weekend but get to play on a big stage then we are happy to do that”. 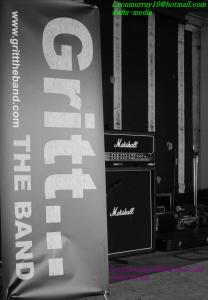 Their 1st festival was in Port Elizabeth, its the biggest held there Splash festival it’s a large event that’s held every year and GRITT have played there for 3 years running now.

Most their lives they have been involved one way or another in music, they’re living their dream right now and when they look back 10 years that’s all it was; a dream. It goes to show that dreams do come true with devotion included. To date GRITT have performed at the Nelson Mandela Bay Splash Festival, Yamaha Talent Search Finals, FIFA World Cup Fan Park, Pool City, Jesters etc, recording, filming their ‘Carboplatin’ video, Photo sessions, workshops, Radio interviews, TV coverage.

Some time ago the band wrote the ‘Carboplatin’ and contacted Cancer research and said do what you will with it to help raise money, the video is on their YouTubechannel and has received positive feedback to date, as expected.

Collectively their influences are Foo fighters, Cold play, Serj from System of a down 80’s rock, Metallica, Nirvana, Pearl Jam, Evanescence “When we get back to South Africa it’s approaching our summer season so we do have some events to look forward too.

How did you all get together? We have been together for about 2 years doing different projects, a while back we all thought to start doing original stuff and looked for a drummer and that’s when we found our amazing drummer Dave.

Dave was playing in several other bands prior to joining Gritt, and in their own words he’s been the core of the band. They all get on as friends even outside of the band and hang out together most weekends, “during rehearsals we may go tiered or grumpy but at the end of it the feeling is great its worth it, we don’t give up it’s very important for us and we leave feeling refreshed.

To relax they like Chinese food watching movies and going to cinema, a good Chinese, food, T.V at times going for a stroll on the beach in P.E called Kings Beach. 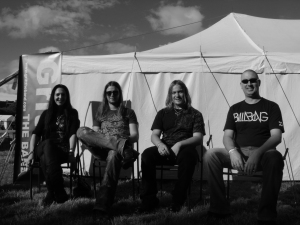 Their favourite foods are chips, bacon, and mushrooms in butter, egg mayo, toast and good coffee basically a good fry up oh and chocolate puddings.

Their album cover for GRITT…THE BAND was taken under a free-way in Port Elizabeth and it was a lot of fun doing their photo shoot as a whole, apart from when some firecrackers was let off.

Gritt’s best advice for anybody who’s starting out or trying to make it as a band is. Lots of practice stick together and basically most importantly, make sure you have equal personalities that way you can make great music. Don’t be disheartened by the negative responses you may get, just take it as they come and keep going.

Stay positive and just enjoy if you’re not enjoying and its like a bind or a job then you may as well not do it.

It’s all about having fun and don’t stop doing what you love.

Gritt the band would love to come back to Wales and THANKS EVERYBODY for their support and have had a TOTALLY AWESOME time during their visit and looks forward to seeing you all again.