The British Rock band ‘Kids In Glass Houses’ are based Cardiff, south Wales.

K.IG.H have been around for several years making a name for themselves and have shared the stage with the likes of ‘Lost Prophets’ ’30 seconds to mars’ to name a few. Nominated ‘Best British Newcomer’ at the ‘Kerrang’ Awards.

Being out of sight for a while, don’t mean they’re sitting quietly.

These guys have been busy touring and writing their 4th album ‘PEACE’ available 30th September. Judging by their recent single ‘DRIVE’ taken from the latest album it seems they’re back with full force, and ready to Rock the scene all over again.

Recently I caught up with ‘KIDS IN GLASS HOUSES‘ before their set at WAKESTOCK 2013.

Leon Murray: Your latest video ‘Drive’ is visually stunning. Who are the 2 main ladies featured in it?

Philip Jenkins: I don’t personally know them. I know the director really well and we’ve worked with him, they’re two actresses they work with him quite a bit, from Cardiff. They both play their rolls really well.

LM: What’s the story behind ‘Drive’?

PJ: Lyrically the song is about obsession.

The loose concept of the video is that, one of the actresses has an obsession with Aled in a way. It’s about different people, how you can be obsessed with someone then switch it off, like at the end of the video. It’s like a big love triangle, that resolves itself in the end.

LM: Your next album ‘Peace’ due out 30th September, how does it differ from your previous albums?

All of our albums are equally different. With the last album we strayed a little bit too far off what people are familiar with.

We took that into consideration when we were writing a lot of the songs, but at the same time we wanted to take it somewhere else. We don’t like to be repetitive with each of our albums, we wanted to take it in a new direction. We’re quite conscious what people loved about our band when we 1st started.

LM: ‘Not In This World’ I get a ‘Mad Max’ feel to it in the video, was that intentional & where was it filmed?

PJ: It was under some flyover in Wolverhampton. The whole album had a bit of throw back 80’s, Mad Maxy, post apocalyptic sort of theatrical side to it.

LM: ‘Undercover Lover’ with Frankie Sandford. Did you enjoy that and will there be any new collaborations with other artist’s?

PJ: There is no collaborations on our new album. That wasn’t a conscious thing, we just didn’t feel it was necessary to do. The thing with Frankie came about kind of off the cuff. She came to a bunch of our shows, we’d met her and she’s a fan of the band. We had this 80’s pop song. We thought it was something typical of the 80’s to to do a duet, male or female. We love a lot of ‘Prince’ songs and to do that dynamic was something we wanted to get out of our system.

LM: What’s the most memorable gig for you as a supporting band?

PJ: We played some shows with ‘Goo Goo Dolls’ when first started. I’ll always remember them, we were just 5 kids playing these massive venues, that always sticks out in my mind. We played Hammersmith Apollo and Manchester Apollo. Last summer we played in amphitheater in South of France, that was probably one of the most beautiful settings we’ve ever played a show.

LM: Who takes the longest to get ready?

PJ: I’d say Shay or Aled. With the hairspray, sharing their bottles of hair spray making sure their quiffs stay up haha.

LM: How do you guys unwind together?

PJ: We all like a little bit of a knee’s up together, Joel doesn’t drink as much as the others.

LM: Do you hang out together?

PJ: We all live really close, we all live in Cardiff. Quite close proximity to each other, so we’re all popping in to each-others houses. Joel owns a Kayak that’s pretty cool. Joel’s quite outdoorsy, he gets out a lot. With the new album we’re round each others houses writing there mainly. In the studio it kind of seems a little forced, so if we get a good song idea we take it to each-others houses and it comes together a lot easier. 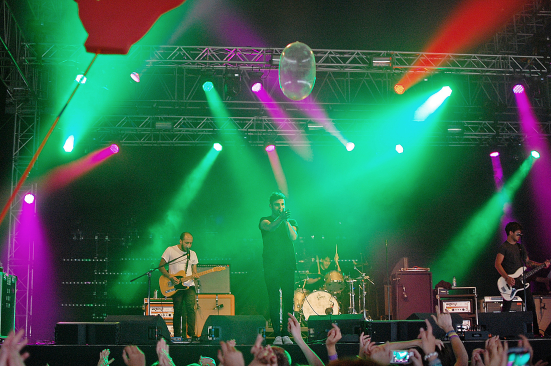 LM: Do you think the internet helps musicians more or is the radio and TV still top dog?

PJ: I think the internet is a massive tool in helping a band connect to their fan-base. It’s a good platform for presenting music, videos and photo’s, you can constantly update people. With the radio, if you have a song on the radio and it’s an A list single that will propel you to be a much bigger band. So I’d say you can need both of them.

LM: What are you looking forward to in 2013? Our album coming out.

PJ: We’ve been really busy this summer, playing lots of festivals. Playing the festivals has been good for us because we’ve been off the radar for quite a while.

Because we’ve got the new album in our back pocket, we just want to release it so we can play all the songs. We can only play a few new songs live at the moment because people don’t know them.

LM: What’s the best advice you can give to someone who’s wanting to start a band?

PJ: As long as you’re really content with what you do, I think it’s going to be a lot more believable for people to get behind it to support you. Don’t try to be a band and naturally do what you want to do.